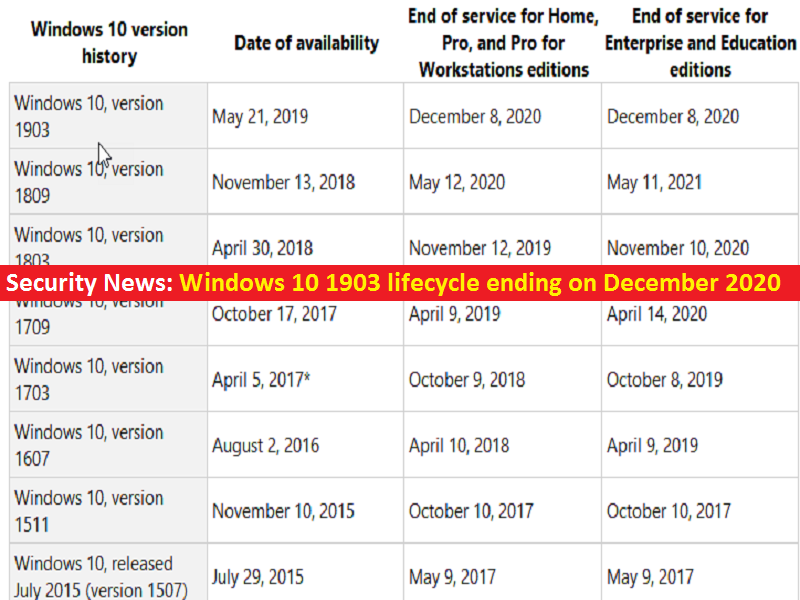 According to report, Microsoft Company is going end the support of Windows 10 version 1903 editions on December 8 2020. The company has already started notifying the users about this big decision and stated that you will still use Windows 10 version 1903 or Windows 10 May 2020 update in your device, but Microsoft will stop providing technical support and bug fixes for newly known issues when reach their end of support.

For those who are not aware, lifecycle of every Microsoft Windows product begins when a product is released and ends when it is no longer supported. When we talk about Windows 10 version 1903 editions, it was released in May 21, 2019 means last year, and according to Microsoft announcements, the support for this OS version will no longer after December 8, 2020. Let’s take have a look at company statements.

“Your computer will still work, but it could become more vulnerable to security risks and viruses because you won’t receive new security updates or other quality updates”

Microsoft recommends the users to upgrade Windows 10 version 1903 to Windows 10 version 2004 before the end of support. They can upgrade their PC manually using “Check for updates” under “Windows update” section in “Settings” App.

To see the full list of end of support deadlines and related migration, you can visit “Search Product Lifecycle page” Microsoft official support site. We are researching on the matter very deeply and we will defiantly post an update, if it will come in future. If you have any suggestions or queries regarding Windows 10 1903 lifecycle ending on December 2020, please write on comment box given below.

Get Windows 10 20HZ October 2020 update before anyone else

How to remove ID SafeXpress

How to remove FractionData from Mac